To close out their current series of public lectures, the Astronomy Department at Nottingham University aimed high and managed to persuade Chris Lintott to present a review of 2011 astronomy highlights.

Chris is an astrophysist, co-presenter of The Sky at Night and involved in a number of projects aiming to bring popular science to a wider audience.

A very engaging speaker, Chris’s talk was entitled “From Mars to the Distant Planets” and he began by pointing out that there was a great deal of astronomy being performed, with some 2,500 press releases landing in his inbox over the last 12months. He then started the talk proper by discussing what has been happening on Mars. . .

Opportunity
The Mars Rover “Opportunity”, which has been in operation far longer than its original design life, has travelled some 21km since landing on the red planet. This has mostly been over gentle sand dunes and in the direction of the Endeavour crater to investigate the rock structures. Endeavour is of interest because craters allow rocks that are normally buried below ground to be investigated. Along the Opportunity has taken some incredible images and made some important discoveries. For example, recently the rover examined the rocks in a boulder field and found them to be gypsum, which must have been formed in the past by underground flowing water.


HiRise
A different view of Mars comes from the orbiting HiRise camera(see here and here), whose website has the tagline “Explore Mars, one giant image at a time”. Chris picked out one set of images that showed evidence of seasonal salt water flows on hillsides (although other researchers have claimed that the flows are merely dust flows.

Curiosity
And there’s more, another Mars lander has just set off from Earth to begin its mission, This vehicle, called “Curiosity” is much larger (about the size of a small car) and is intended to have a much greater range than the previous rovers. Because of its large size, it cannot land using the usual balloon cushions, instead it has to use a frankly bonkers system of hovering carrier craft and winch. You can see just how bonkers this procedure is in the video below (if you are in a hurry, start at 33sec)


Curiosity has four mission goals :
1.Determine whether Mars could ever have supported life
2.Study the climate of Mars
3.Study the geology of Mars
4.Plan for a human mission to Mars

Dawn
Another highlight of the year for Chris was the investigation of the asteroid Vesta by the Dawn probe (see here and here) which revealed a huge mountain and that Vesta was composed of an interesting mix of old and new rocks.


A Chaotic Solar System
It has long been known that many of the craters on the surface of the moon were produced during an intense period of activity known as the “Late Heavy Bombardment” but it is only now that researchers are beginning to understand what may have caused the Bombardment.The early solar system was very chaotic, to the extent that it may have ejected a fifth gas giant and Uranus and Neptune may have swapped places!

As the orbits of the planets shifted, they may have nudged material from stable orbits in towards the sun or outwards away from the solar system. It was this incoming material that may have formed the basis for the Late Heavy Bombardment.

Kepler
Surprisingly, it has been the study of planets orbiting other stars that that has given clues to the formation of our own solar system. A key tool in this investigation has been the Kepler satellite which is “specifically designed to survey a portion of our region of the Milky Way galaxy to discover dozens of Earth-size planets in or near the habitable zone and determine how many of the billions of stars in our galaxy have such planets”. The satellite only has one instrument - a photometer that continuously monitors the brightness of over 145,000 main sequence stars in a fixed field of view. The instrument registers the very small dips in a star’s brightness that occur when a planet moves in front of it. To do this, the instrument needs to be able to register a reduction in brightness of just 0.01% - an astonishing level of accuracy.
Recently, Kepler recently found a planet (Kepler 22B) that was in the “goldilocks” zone around a star where temperatures are in the range that allows liquid water to form. There seems little doubt that the accelerating progress in this area will results in many such planets being discovered in the future.

Chris pointed out that planets are not just being found orbiting stars, but also floating freely in space, presumably because they have been ejected from unstable young solar systems. Surprisingly, there are a lot of these “free” planets, in fact, in our galaxy there may be more lone planets than there are stars!

The Lockman Hole
Telescopes wishing to look at objects outside our own galaxy often turn their direction to a region of the sky known as the “Lockman Hole”, as this has an unusually low amount of Hydrogen gas present in it. The Herschel Telescope has been looking in this direction and managed to produce some stunning images. For example, in the image below, each dot is a galaxy. I’ll say that again, each dot is a whole multi-million star GALALXY !!!!


Are you for SCUBA?
Moving back to Earth, Chris listed a few highlights of the ground-based telescope year. First off was the SCUBA-2 submillimetre camera which is now working in a telescope on Hawaii. A program plagued with bad luck (including losing 9 months of development because the lab was sealed due to a plutonium spillage), SCUBA2 will be able to see into the dust clouds where stars are forming, thus giving further insights to this process.

ALMA
The huge ALMA project in Chile, comprising some 66 radio telescopes (of which 19 have been set up so far) arranged in an array. Gobsmackingly, the individual dishes are mobile, which allows the array to have a variable “zoom”.

Press Release of the Year
Chris peppered his talk with some humorous asides, largely related to the way astronomical research is presented in the media. His favourite related to an image of the oldest quasar yet found (see red dot near centre of image below). . . 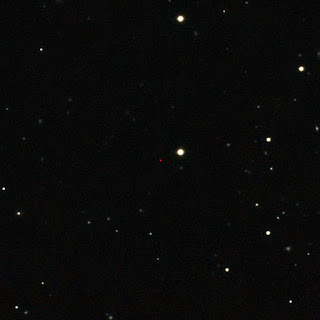 . . . was turned into the following by a PR department : 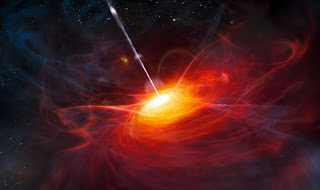 Lastly, before the Q&A session, Chris provided a few links for prople who were interested in learning more about astronomy:

The Milky Way Project aims to sort and measure our galaxy. We're asking you to help us find and draw bubbles in beautiful infrared data from the Spitzer Space Telescope. Understanding the cold, dusty material that we see in these images, helps scientists to learn how stars form and how our galaxy changes and evolves with time

Astronomy and science chatter from astronomers Chris Lintott and Robert Simpson can be found at : http://recycledelectrons.tumblr.com/

Lastly, you can email Chris at : chris@zooniverse.org

Update (11 Dec)
Chris has subsequently very helpfully mentioned that most astronomy papers are available at www.arxiv.org
Posted by Ash at 19:40