A team of researchers investigating the tiny nano-scale motors in cells were part of the the Royal Society's Summer Exhibition recently, in which they described the work they are undertaking to understand the way these motors work and also to try and build their own.
Two particular areas of investigation related to the flagella that propel bacteria and the transport mechanisms within cells.

Flagella
Many bacteria have a whip-like tail that they use to propel themselves around. This is powered by a tiny motor (see diagram below). The “fuel” for the motor is a charge difference between the inside and outside of the cell wall. This causes a flow of positively charged hydrogen ions to move across the cell wall. The “rotor” part of the motor is the structure that actually transports the ions across and is turned as it does so - at speeds of up to several thousand rpm. 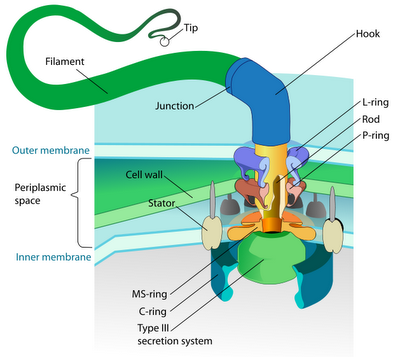 Kinesin
NSB talked to a charming an enthusiastic researcher who explained that all cells have a kind of “rail network” within them of microtubules. These are used by Kinesin molecules to transport material around the cell (e.g food inwards from the cell wall, waste outwards to the cell wall, intermediate chemicals within the cell), with each function having its own network of microtubules.Incredibly, the Kinesin molecules “walk” along the microtubules, carrying their cargo as they do so.

One can get some feeling for the incredible complexity of a cell, and just how many processes are working at the same time, from the animation below, you can see Kinesin molecules “walking” at around 1m07s to 1m25s.

There is also a more detailed explanatory video here.

A detailed look at the kinesin mechanism can be found in these 2008 and 2009 papers by Baker and Berry from the University of Oxford, both of which have some incredible imagery

Synthetic Nanostructures
The University of Oxford are also looking at ways of using DNA building blocks to manufacture nano-scale structures, nano-motors and (in combination with Kenesin) DNA nano-shuttles. It is all fascinating stuff and you can read about it at the groups web page here.